1. Where is Palestine?
Palestine covers [covered] what we now call Israel, plus the Occupied Territories. It borders Lebanon in the North. Syria and Jordan in the West. Touches Saudia Arabia and Egypt in the South and the Mediterranean Sea in the East.

2. When was the Land of Palestine inhabited?
The city of Jericho was built by Arabs around 10,000 years ago.

3. Who are the Palestinians?
People who can trace their roots, over many centuries, to the land of Palestine – often referred to as the Holy Land.

4. Historical Chronology
• 3,000 BC – Canaanites were the People of Palestine

• 2,500 BC – Canaanites around Jerusalem. Jerusalem established by Jebusites a Canaanite tribe.

• 2,000 BC – Prophet Ibrahim/Abraham [as] migrates to the land of Palestine/Jerusalem.

• 1842 BC – First mention of Jerusalem discovered in a text [Egyptian].

• 1,350 BC – First mention of Jerusalem as a city state discovered in an Egyptian letter called the Tel Amarna letter.

• 1,200 BC – A people from Greece called the Philistines occupy the Land of Canaan and most probably Jerusalem and ruled it for only 40 years.

• 1,020 BC – Prophet Daud/David [as] fought a battle with the Philistines, destroyed them and established the Ancient Israel.

• 965 BC – Prophet Sulayman/Soloman [as] succeeds Daud [as] as the King of Israel. 922 BC – After Sulayman’s [as] death the Kingdom of Israel was split. Judea with Jerusalem as its capital and Israel destroyed by Babyloniaons.

• 926 BC – Egyptian forces occupy Jerusalem. However, the house of David was allowed to flourish under Egyptian rule!

• 701 BC – Assyrians capture Jerusalem and make the whole of Judea a tributary state.

• 587 BC – Nebuchadnezzar King of Babylon destroys Jerusalem including Sulayman’s [as] Temple. All Jews are either killed, exiled or taken prisoners. END OF ISRAEL! Only after 400 years!

• 538 BC – Persian King Cyrus captures Jerusalem from Babylonians and allows Jews to return as his ‘citizens’. The Jews re-built the Temple.

• 332 BC – Alexandra the Great captures Jerusalem.

• 301 BC – Break up of Alexandra’s kingdom, the Ptolemics of Egypt rule Palestine. 200 BC – Greek/Syrian Seleucids capture and rule Jerusalem.

• 169 BC – Seleucid King Antochius destroys forbids the practice of Judaism.

• 1229 – Jerusalem ceded by treaty for ten years to Crusaders.

7. Where did the Jews come from?
More than half of the Jews living in Palestine at that time were recent immigrants, who had come to Palestine in the preceding decades in order to escape persecution in Europe. And that less than 5% of the population of Palestine was native Palestinian Jews.

8. Who owned the land?
The Arabs of Palestine at that time owned 97.5% of the land, while Jews (native Palestinians and recent immigrants together) owned only 2.5% of the land.

9. Who sold Jews the land?
During the thirty years of British occupation and rule, the Zionists were able to purchase only 3.5% of the land of Palestine, in spite of the encouragement of the British Government?… And that much of this land was transferred to Zionist bodies by the British Government directly, and was not sold by Arab owners.

10. What was the land ownership in 1947?
When British passed the Palestine Problem to the United Nations in 1947, Zionists owned no more then 6% of the total land area of Palestine.

11. Why did Palestinians reject UN Partition Plan?
Besides the above facts, the General Assembly of the United Nations recommended that a “Jewish State” be established in Palestine. They proposed the Jews should have about 54% of the total area of the country while they only owned 6%.

12. On whose land is Israel established?
Israel illegally occupied (and still occupies) 80.48% of the total land area of Palestinians.

13. When did Israel occupy the Palestinian land?
The territorial expansion took place, for the most part, before 15 May 1948: i.e., before the formal end of the British forces from Palestine, before the entry of Arab armies to protect Palestinian Arabs, and before the Arab-Israeli war? In 1948, 13 towns, 419 villages, and 99 tribal lands were depopulated in order to declare the State of Israel, occupying 78% of Palestine. 85% of Palestinian population “ethnically-cleansed”!

14. The question of refugees?
In 1948, the number of refugees was estimated (by the Conciliation Committee) to be 804,676. In 2000, out of a total (worldwide) Palestinian population of c.8M, some 5M are refugees – the largest number of refugees in the World! Many still live in overcrowded, squalid camps, not only in occupied Israel, but also in neighbouring countries of Jordan, Lebanon, and Syria. 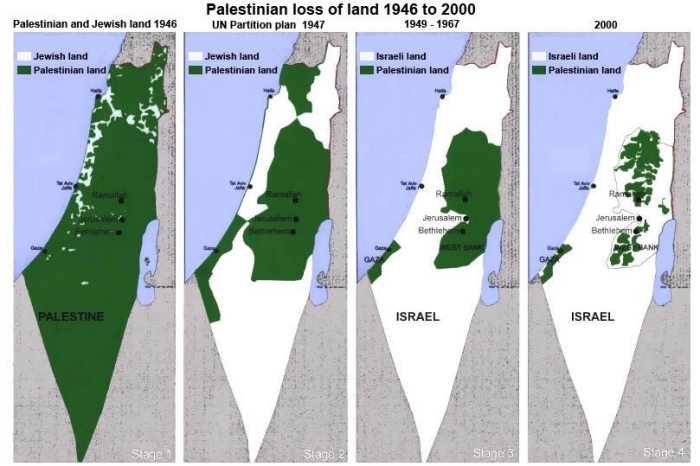 15. Did you know…..
…..That, the 1947 recommendation of the General Assembly in favour of the creation of a “Jewish State” was outside the competence of the Assembly under the Charter of the United Nations.

…..That, all attempts by the Arab States and other Asian countries to have the Assembly submit the question of “constitutionality” of its recommendation to the International Court of Justice for an “advisory opinion” by the Court were rejected or ignored by the Assembly.

…..That, when the Assembly began to experience “second thoughts” over the matter and convened for its second special session in 1948, it failed to reaffirm the 1947 recommendation for the partition of Palestine-thus destroying whatever dubious legality that recommendation for the establishment of a “Jewish State” had had

…..That, that original 1947 recommendation to create a “Jewish State” in Palestine was approved, at the first vote, only by European, American and Australian States…for every Asian State, and every African State (with the exception of the Union of South Africa) voted against it…And that, when the vote was cast in plenary session on 29 November 1947, urgent American pressures (which a member of the Truman cabinet described as “bordering onto scandal”) had succeeded in prevailing only upon one African country (Liberia), both of which had special vulnerability to American pressures, to abandon their declared opposition?…And that, in other words, the “Jewish State” was planted at the point-of-intersection of Asia and Africa without the free approval of any Middle Eastern, Asian or African country except that Union of South Africa, itself ruled by an alien minority.

…..That, since the General Armistice Agreements were signed in 1949, Israel has maintained an aggressive policy of waging military attacks across the Armistice Demarcation Lines, repeatedly invading the territories of the neighbouring Arab States…And that Israel has been duly rebuked, censured, or condemned for these military attacks by the Security Council of the General Assembly of the United Nations on eleven occasions-five times by the Security Council and six times by the General Assembly.

…..That, no Arab State has ever been condemned by any organ of the United Nations for military attacks upon Israel.

…..That, besides expelling the bulk of the Arab inhabitants of Palestine, and besides constantly attacking the neighbouring Arab States, Israel has also consistently harassed the United Nations observers and other personnel stationed along the Armistice Demarcation Lines: It has assassinated the first United Nations Mediator and his military aide; it has detained some truce observers; it has military occupied and illegally searched the Headquarters of United Nations personnel; and it has boycotted meetings of the Mixed Armistice Commissions.

…..That, Israel has additionally imposed a system of apartheid upon the Arabs who stayed in their homeland?…More than 90% of these Arabs live in “security zones;” they alone live under martial law, restricting their freedom to travel from village to village or from town to town; their children are denied equal opportunities for education; and they are denied decent opportunities for work, and the right to receive “equal pay for equal work”.

…..That, notwithstanding the foregoing facts, Israel has always been, and still is, widely portrayed in the Western press as the “bastion of democracy” and the “champion of peace” in the Middle East.

…..That, the Western Powers have persisted in declaring their determination to ensure a so-called “arms balance” in the area, as between Israel, on the one hand, and the one-hundred million inhabitants of the thirteen Arab States, on the other hand?… And this unilateral Western doctrine of so-called “arms balance” is no more reasonable than the suggestion that, in the Cuba-U.S.A conflict, there should be “arms balance” as between Cuba and the United States… or that the whole Continent of Africa should not be allowed to acquire more arms than South Africa… or that Mainland China should not be permitted to have more arms than Taiwan… or that the military allowed to acquire more arms than South Africa… and that only thus can peace be safeguarded in the Western Hemisphere, in Africa, in Asia, or in Europe.

…..That Some 34 massacres have been committed against Palestinians – as part of the occupying 78% of Palestine.

…..That, Israel and the Zionists are “in breach” of over 60 United Nations Resolutions (see the list of UN Resolutions Against Israel, 1955-1992). Thousands of indigenous Palestinians have been murdered in their own homeland; millions have been ethnically-cleansing by an “illegal occupying power”; Billions of US dollars have been used to finance the illegal occupation by Zionists of the land of Palestine; the Zionists have been supplied with the very latest and sophisticated (including nuclear) weaponry; since 1967, the Muslim Holy Site of Al-Aqsa has been violated by Zionists on more than 100 occasions; the so-called “Oslo Peace Agreement” in fact relates to only to the original occupants of Gaza and the West Bank – some 1M Palestinians! The WAR: “a MILITARY POWER suppressing (illegally) a CIVILIAN (UNARMED) POPULATION”! On 20 Oct, 2000 YET ANOTHER U.N. CONDEMNATION OF ISRAEL, WHAT PRICE HUMAN RIGHTS.

16. What is Zionism?
Zionism is claimed to be political expression of Jewish nationalism. Before first World War most Jews were against Zionism and today not all Jews are Zionist. Zionism has become a form of racism and the UN in 1975 ruled “Zionism is a form of racism and radical discrimination,” which wants to create Palestine [now Israel] into an exclusive Jewish country.

17. Is Anti Zionism a form of Anti Semitism?
Zionist propaganda likes to equate Anti-Zionism as Anti-Semitism. This is to frighten people who campaign for justice in Palestine. Remember opposition to Zionism is not opposition to a people [Jews] but to a political philosophy which claims it is impossible for Jews to be integrated into non-Jewish society.

18. What is Intifada?
It literally means “shaking off”, and in this context it means to set free from the Israeli oppression. The first intifada started on 8th Dec 1987 when four Palestinian men queuing at a checkpoint into Gaza were crushed to death by an Israeli army transporter. The second Intifada started on 28th Sept 2000 when Sharon with over 2,000 Israeli soldiers desecrated the Al Aqsa Mosque and killed 4 people. 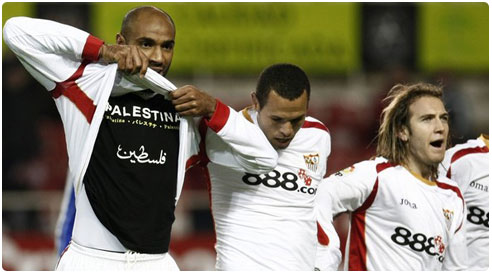