There is a wave of discrimination and maltreatment of Muslim students in different schools from different districts of Lagos State. Worthy of mention is that of Comprehensive High School, Alapere, Ketu and Itire Community Senior Secondary School, Mushin. The principal of the former ordered a ban on the use of Hijab in and out of the school and stopped the students from observing Zuhr (Noon) and Jum’ah(Friday) prayers in the school premises and after closing. The latter, on her way to school, in a public bus, scolded and ordered her student to put off the Hijab. These acts elicited concern from the Muslims and resulted in series of letters to the concerned principals, District Heads and the Ministry of Education. Read More >>>

The Nigerian embassy in Washington DC on October 28, 2013 denied a Muslim sister in hijab who had gone for a biometrics appointment necessary to replace passport any service on the basis that she had to expose her ears. Even when the victim informed the attendant that she was wearing the hijab for religious purpose and as such could not expose her ears, an immigration attaché at the embassy intervened and insisted that the victim had to “because it is the law of Nigeria that ears must show”. Read More>>>

Muslim medical practitioners, Islamic Medical Association of Nigeria, IMAN, and Muslim Public Affairs Centre, MPAC, have petitioned the federal government against the injustice, violation of fundamental human right, harassment and victimisation meted out on three Muslim Nurses; Sekinat Folake Abdulfattah, at the Lagos University Teaching Hospital, LUTH, and Lawal Fasilat Olayinka, Sekinat Sanusi of National Orthopedic Hospital, Igbobi, because they have chosen to wear hijab as of part of their uniform as approved by Nursing and Midwifery Council of Nigerian.

Hijab Campaign: Psychological Help
On the individual level, stick to Almighty Allah’s order to wear hijab. Following Almighty Allah’s order must have priority over any other order. At the same time be patient regardless of the hardships you may encounter, bearing in mind that true believers are always tested.
Learn More…

Hijab Legal Cases
On a recent July afternoon Rashida and two of her hijabi friends entered the newly opened restaurant “The Lounge” in The Hague, the Netherlands, which offers customers a menu of “multicultural dishes.” Ironically, their colorful presence was not appreciated; after having found seats they were approached by a waitress who told them she could not take their orders because of the restaurant’s policy against head coverings.
Learn More…

The issue of abuses against Muslim women in hijab has become a prominent one that must be tackled today. This issue may be one that is taking place in France, Turkey and a host of other places where hijab is banned in official places and Muslims women are being stereotyped, excluded and discriminated against.
Learn more…

How to Organize a Successful Demonstration
The first and foremost requirement for organizing a successful demonstration is a tight action plan that includes the following:
Learn More…

HIJAB: Fabric, Fad or Faith?
“Yeah, I just got on the bus and I’m on my way home. Okay, Mum, Wa’alaikum Assalam.” I slip my cell into my bag. A girl in a yellow tank top and dark blue cut-offs plops into the seat beside me.
Learn More… 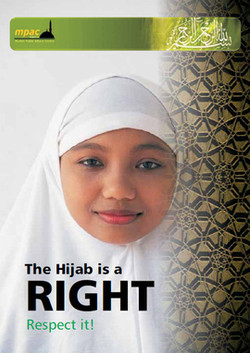